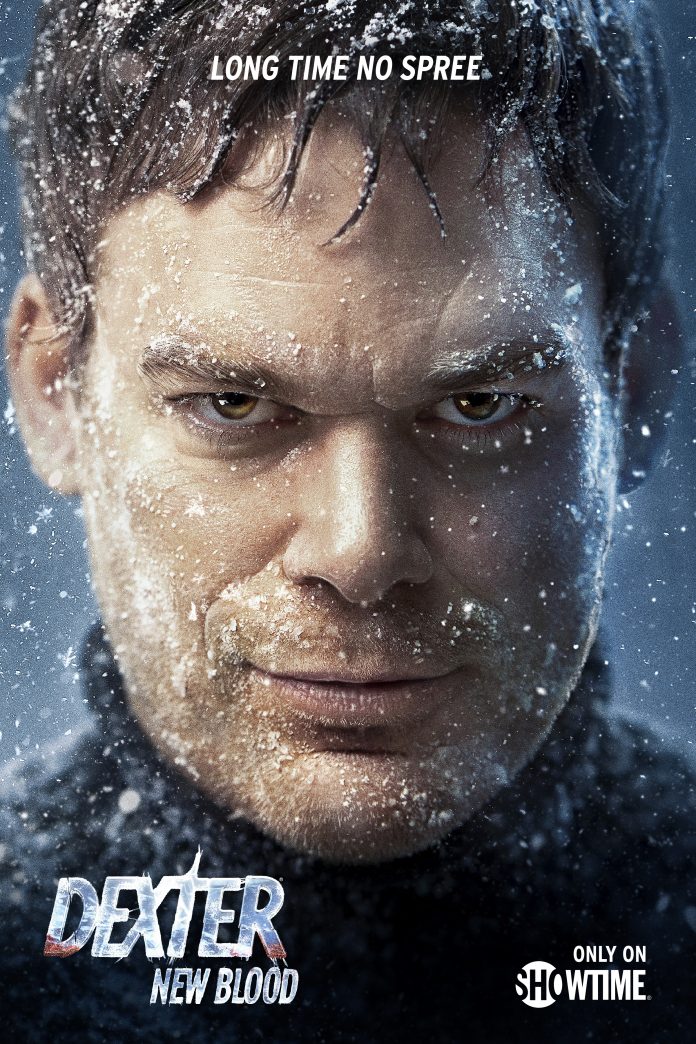 It wouldn’t be Dexter without murderous, blood-covered spoilers everywhere!

Like most Horror fans, I was absolutely in love with the original Showtime show Dexter when it first came out many fabled years ago. Some of the subsequent seasons were absolutely amazing, some of the entire seasons were hated by critics and fans alike, but the response to the lackluster lumberjack ending of Dexter more than 8 years ago at this point was a resounding outcry of, “Wtf was that? Dexter deserved better!” And, after years of lobbying and hard work and dedication, a revival of the beloved Dexter series came into being, a sequel to find out what happened to our favorite “serial killer who kills serial killers” some ten-plus years later!

When we catch up with Dexter (Michael C. Hall), our beloved murderer has hunkered down in the fictional town of Iron Lake, New York. He has a new name – Jim Lindsay, a nod to the author of the original Dexter books, whose name happens to be Jeff Lindsay – a convenient job at the local hunt, game and fish store, and his girlfriend Angela happens to be the Native American chief of police for the town. ‘Jim’ is known and well-liked in town, Angela’s adopted daughter Audrey (Johnny Sequoyah) gets along well with him too, and everything seems pretty peachy. Or does it?

Secrets, and the past, have a way of catching up to everyone, sooner or later. And despite the fact that apparently Dex managed to somehow box up his Dark Passenger and not kill anyone, bad guy or not, for somewhere around ten years or so, his skill set in this is never far from hand. And when Dexter begins having visions of chasing a white buck through the forest, a single act of privileged idiocy causes Dex to break his long fast and murder someone who, lets be real, the world could live without anyway. But that’s only the beginning, and while a search for the missing Caldwell boy is being organized on Dex’s cabin property and land, a youngling hitchhiker in a hoodie and a backpack shows up in Dex’s doorstep to announce, he’s Harrison. You know, the son Dex had with poor Rita, baptized in blood when the Trinity killer kills her quite dead in front of innocent baby Harrisons eyes, whom Dexter hoped would never turn out like him and so sent his only son far far away, that kid. He’s now a justifiably angry (at least with his dad) teenager, and here for answers.

So Angela Bishop (Julia Jones) has a whole nation of Seneca Indians behind her, rich with tradition and history and culture, yet there is little discussion of the significance of the white buck and his death other than to repeat that it happened on Seneca tribal land. It falls to the children to properly care for the white bucks corpse because as usual, the adults are worse than useless when it comes to the important matters. As for the white man who went missing after killing the white buck, Matt Caldwell, the general feeling among the Seneca is, he got what was coming to him. But Angela is Chief of Police Bishop of Iron Lake after all, and nothing would do but to organize a search for the missing Caldwell boy, especially when his father Kurt Caldwell (Clancy Brown) kicks up such a ruckus.

Chief Bishop has her own long-running missing-persons investigation still on-going, ever since her bestest friend in high school disappeared. Since then, young transient girls keep going missing from in and around Iron Lake, and Bishop does her best to keep track of all of them, obsessively so. This is what’s known in the entertainment biz as “foreshadowing” folks, because in real life this whole missing-womens board Bishop has going would be at best, ignored and at worst, ridiculed.

But none of that matters right now because the search for Matt Caldwell on Dex’s land is on-going, Harrison is standing there introducing himself as “Harrison Lindsay” to Dex’s fellow townies, and Dex’s version of the Harry conscience that used to live in his head has been subsequently replaced by a screaming, weeping dead-sister Debra (Jennifer Carpenter). The house of cards that Dex has been leaning on in the last several years – the empty cabin in the middle of blank land, the protective romance with the town Chief of Police, the camouflage of the entire easy-going and helpful Jim Lindsay personality – is about to come crashing down in the most heartbreakingly destructive ways possible!

So, as we know, Harrison (Jack Alcott) is back to demand answers from his reluctant father, and dear Dex finds himself at a complete loss. In the midst of typical rebellious teenage shenanigans Harrison manages to demonstrate that his adolescent rage and blood-lust is far from normal, and finally Dex begins to worry about the legacy he’s leaving his son. What if Harrison sports his own Dark Passenger? There’s no more Harry with his Rules to set Harrison right, and so in potentially the worst method of mentoring possible, Dex begins to teach his son control, and the Rules, and the methods by which our beloved “serial killer who kills serial killers” carves out his vengeful art. All while ghost-Deb in his head rages and rants, a far departure from Harry’s calm capability. Which, while that would’ve been a perfectly fine legacy to leave Dexter’s wayward son, we can feel Dex’s reluctance and fear in every single interaction with Harrison, and we know that Harrison sees it too. Any child of Dexter Morgan would be blessed, or cursed depending on how you look at it, with razor-keen intelligence.

Far too much time is spent dwelling on the sins of the parental units being visited upon the heads of the next generation, and not just for Dexter and Harrison, but also for Angela and her daughter Audrey, for the entire Caldwell clan, hell, the entirety of Iron Lake seems to have some serious Mommy/Daddy issues that absolutely no one wants to address. And while the adults are still, still, bemoaning their pasts and taking absolutely no responsibility for their own actions, life goes on for their children, who start making their own, even bigger and potentially deadlier, mistakes.

As for that rather bloody and final ending, of all the heritages Dexter Morgan could’ve chosen to leave his son with, I personally would not have gone with that one. If Harrison chooses a vasectomy as his next birthday gift, I would not be at all surprised. And while Jack Alcott delivers a brilliant performance as a typically rageful teenager with a very un-typical inheritance, let’s be honest, that’s not why we’re here. Once again, Dexter deserved better.

Get spattered by all the bloodspray in Dexter New Blood on Showtime now!