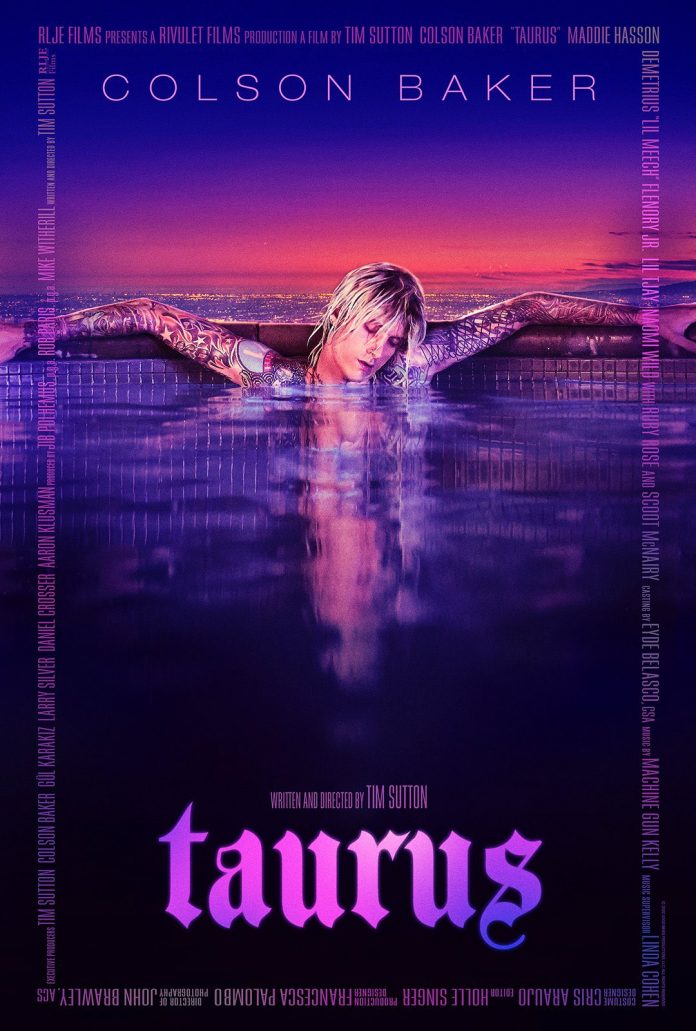 Chasing the last days of a rising music star who, while trying to write his next big hit, dives headlong into his own downward spiral of drugs, expectations, and the crushing pressure of super-mega-stardom.

So, the lead character Cole is played by Colson Baker, known more popularly as Machine Gun Kelly, and is a fairly unnerving parallel of his own real life. Even the films title, Taurus, refers to MGK’s own zodiac sign.

We open with Cole wanting to work on a new song with accompanying female vocalist Lena (Naomi Wild), and though their interactions about his magic crystal with all his energy in it and his lack of direction or even interest is pretty apparent, Cole also seems satisfied? ish? with what she produces. From there we proceed into the strange fever dream that is Cole’s current existence – interminable meetings, product deals, collaborations with distributors, expectations for deadlines to be met, responsibilities to his daughter, strictures for his music and even life schedule, and on the twisted-flip side, clouds of welcome drugs, skeezy friends, expensive therapeutic call girls, creative binges and true art emerging like a light at the end of a tunnel. But really, all Cole sees is darkness.

The true hero of the desolation that is Cole’s life is, inevitably, his handler – Ilana (Maddie Hasson) acts as his shrink, walking reminder calendar, sober companion, emotional punching bag, motherly-slash-sisterly-care-giver, and anything else Cole could conceive a need for, and she does it all with willpower that is awesome to behold, given the major diva tendencies of her charge. Handlers of Hollywood folk – singers, actors, fashionistas and others – are more often than not loyal far past where their paychecks ended, offering up their own lives as a sacrifice to keep their charges’ lives from falling the hell apart. When the predestined breakdown between handler and charge happens onscreen, I for one was glad for Ilana’s finally, finally, giving Cole even a taste of the torment he inflicts on others – the scene is almost cathartic, and even Cole seems strangely relieved. Honesty in the performing artist world is a prize more valuable than diamonds, and far, far more rare.

So much of Cole’s life seems fake, plastic, hollow – the ridiculous mega-star house is in actuality just a superficial rental; the services of the obviously extravagant call girl Zia (Sara Silva) he invites over are much more drug mule and much less prostitute; Cole’s daughter Rose (Avery Tiiu Essex) calls him “Cole” too and though she lives in another part of the rental house, may as well be on the moon for all that she enters into Cole’s consciousness; even the blacklit scenes with Cole’s druggie pal Bub (Ruby Rose) are only philosophical on the surface, no depth at all. Assistant Ray (Scoot McNairy) practically has a foot-stomping tantrum himself while trying to fulfill all of Cole’s needs, which is effectively impossible, because what he really needs isn’t tangible.

The single bright spot in Cole’s life, in possibly the entire film, is the sadly short creative scene wherein Cole collaborates with some fellow singers (real-life rappers Lil Tjay and Lil Meech) and they have a freestyle sesh in the recording studio. We are served a fleeting glimpse of what Cole must have been like when he began – fresh, eager, talented and raw but blissfully alive and ready to take on the worlds’ injustices with his music. Cole’s moment of genuine artistry is interrupted by yet another fan with pleas, and we can practically see him deflate entirely into the shell armor he’s constructed around himself in order to survive stardom, a sad commentary on the music world and the way we treat our artists in general.

In the grand tradition of Oliver Stone’s psychedelic film The Doors, Taurus comes to a rather final if unsurprising ending, with Cole going far beyond the reach of fans, friends, and expectations, to whatever he finds on the other side. Let’s hope Machine Gun Kelly doesn’t decide to take the same route through stardom.

Filmed often in a haphazard and surreal way, likely to highlight Cole’s own unraveling, Taurus drags us on a mushroom highway journey laced with excellent music, most of which is from Colson’s own catalogue. Consume if you dare!

SDIFF 2022 Opening Night presents ‘Armageddon Time’: Be a Mensch if you can