It’s highly unusual for the geek and nerd crowd to be gathering at the San Diego Convention Center with a nippy chill in the November morning air, but that is exactly what happened on Friday, Nov 26th, 2021.

Most of us didn’t think it was going to happen at all, never mind the fact that SDCC was insisting they’d somehow make it work, many of us had managed to purchase tickets, and programs were being put together, costumes prepared, plans made. The Covid pandemic is still a giant concern, and the good people at San Diego Comic-con were determined to accomplish two major challenges to a collective horde of eclectic folk – proof that all con-goers are vaccinated against Covid, and insisting every single last person mask it up. How to accomplish such a monumental task though? 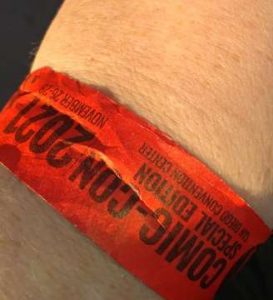 The volunteers of Comic-con, the line-wranglers, the direction-givers, the staff with their thankless jobs, the celerity handlers, and definitely the security peoples, are never given enough credit, but this year, in particular, they all went above and beyond what could be asked of them. Regular people are suffering all sorts of varied exhaustions, but the volunteers of SDCC sat in open-air booths outside and checked ID after ID, all the vaccination cards, and dispensed the red wristbands that proved I had proven I was, indeed, vaccinated against Covid. For those who wanted to brave the thought of a vaxx reaction at the Con, there were even private booths where one could receive the vaccination. I and all the Con-goers were obligated to wear the red wristband every single day we went to SDCC, in point of fact, one cannot get into the convention center building AT ALL unless one is wearing both the Comic-con badge and the red wristband. 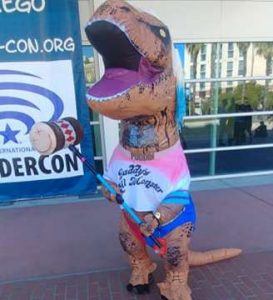 Many many Con folk gleefully wore matching masks to their costumes, or proudly displayed fashionable home-made ones (like I did), or sported the common hospital-like PPE mask that one can pick up pretty much anywhere now, and many of the Con staff could happily reach under the desk and toss a pre-packaged mask to a geek who didn’t have one. The matching masks for the Star Trek uniforms (complete with rank pips), or the part-of-the-cosplay shots of the likes of Mileena from Mortal Kombat, the functioning masks for guys from Borderlands, Star Wars, and all manner of other fashionable nerd-doms, was just another way for us to flaunt our fan-doms, and not a single person complained.

Honestly, we were all so very surprised to actually have Comic-con Special Edition come to fruition, and most of us are suffering exhaustion from the various issues that stem from all things Covid, so the thought of complaining wasn’t ever really raised, within my earshot at least. Everyone was SO (genuinely) polite and kind and civil to each other because everyone seemed to feel that tiny underlying threat that, perhaps if we don’t follow the rules made for our health and safety, we may not get another SD Comic-con at ALL.

The day commonly known in America as ‘Black Friday’, for its present shopping deals the day after Thanksgiving, spread the monetary insanity inside the convention hall’s regular exhibit area, with plenty of ‘Black Friday’ deals for all and sundry. Actually, it seemed as though many of the merchants had holiday shopping deals for their art or merch that went all weekend-long, never mind just Friday. The crowds that normally swarm and take over the entire Convention Center en masse were considerably smaller this time, reminding many of us of a time when we were much younger Comic-con attendees when it was smaller, more intimate, and definitely less commercial. SDCC Special Edition lacked the giant displays of the likes of Disney and WB, but also the horrendous lines that usually accompany such a flash. One could actually stretch one’s arms out completely and turn in a circle without hitting another person in the exhibit hall shopping area, and that hasn’t happened to me at regular Comic-Con in more than a decade of going.

All sorts of panels were put on, in a true Comic-Con manner, but it was strange for San Diego’s sun to set around 4:30-5 and there were still plenty of panels and SDCC-related con events happening. The chill in the air didn’t go away pretty much all day, which was a nice if odd circumstance. As the exhausted but giddy con-goers made their ways home or back to the hotel for the night, full to the brim of seriously-missed companionship and fellowship of their fellow humanoids (and aliens and magical creatures, yes yes, we’re all-inclusive here sorry), a tired-but-happy feeling pervaded the air. The magic, that sorely missed and needed feeling of being with one Tribe, one people, settled over a small part of the world and we, the geeks and nerds who will inherit the Earth, felt happy for the first time in almost two years.