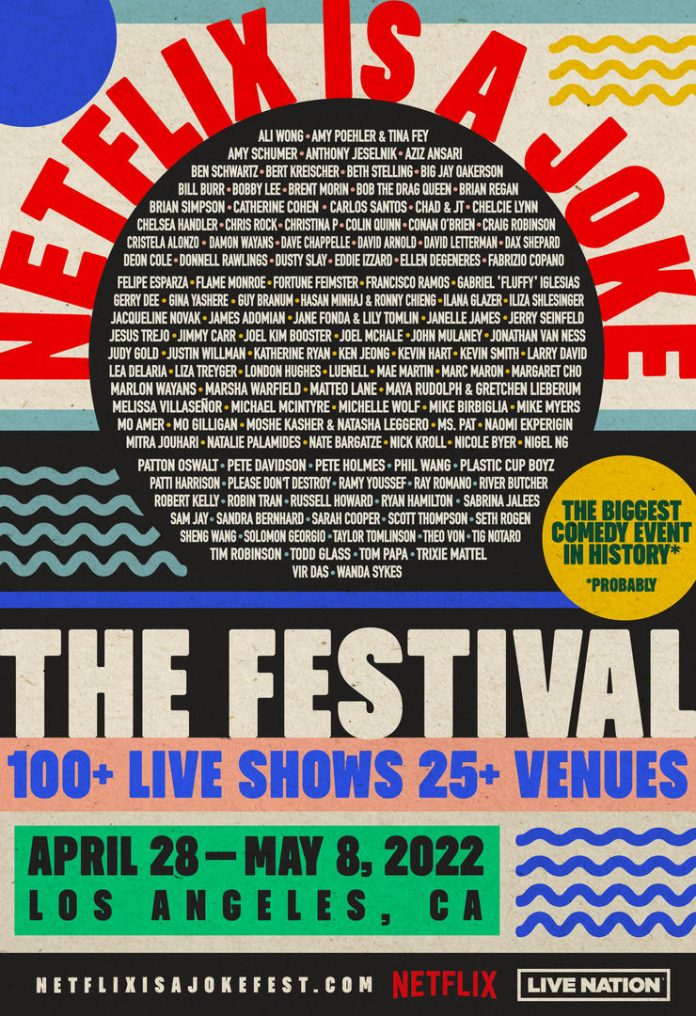 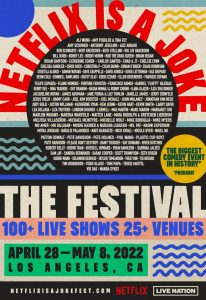 *Note:  Select artists above may have show details to be confirmed at a later date. Check the website for details.

The festival will take place across over 25 venues including   Dodger Stadium, Hollywood Bowl, The Greek Theatre, The Forum, Crypto.com Arena, formerly STAPLES Center, Hollywood Palladium, The Theatre at Ace Hotel, The Orpheum Theatre, The Wiltern, TCL Chinese 6 Theatres, YouTube Theater, The Comedy Store, The Dynasty Typewriter, The Fonda Theatre, The Laugh Factory, The Troubadour, The Improv and more.

“It’s absolutely thrilling for Netflix to be hosting a comedy festival of this magnitude in Los Angeles, ” said Robbie Praw, Director, Stand-up and Comedy Formats, Netflix. “We were so disappointed to postpone the event last spring and our line-up of comedians can’t wait to bring much needed laughs to audiences in LA and around the world on Netflix.  Netflix Is A Joke Festival is going to give comedy fans the opportunity to see the greats and discover new voices  in one of the greatest cities in the world.”

Tickets for all festival events will go on sale to the general public Friday, December 10th at www.NetflixIsAJokeFest.com. Pre-sales will be available beginning Tuesday, December 7th. Select shows will be recorded and available in their entirety at a later date on Netflix. Highlights will also be available on the Netflix Is A Joke SiriusXM channel and on its social platforms.

Highlights from the 11-day festival include:

Legendary late night host David Letterman returns to his roots to showcase some of today’s finest stand up comedians to perform and then join him for a one-of-a-kind interview.

Pete Davidson and his best friends are doing stand-up comedy for you and your friends.

The latest information and complete schedule is available on www.NetflixIsAJokeFest.com.

“*Talent and schedule subject to change”.

The Book of Boba Fett: Chapter 1 Gives Fans What They Want