ID10T Music Festival & Comic Conival will take over the Shoreline Amphitheatre and surrounding grounds in Mountain View, CA on Saturday, June 24th and Sunday, June 25th. Created and hosted by Chris Hardwick, one of the most recognizable faces in pop culture fandom and one of today’s top touring standup comedians, ID10T (pronounced I-D-ten-T) will combine chart-topping musicians, renowned comedians, makers, and some of the most influential people in the entertainment industry, together in one place for a once-in-a-lifetime weekend experience. 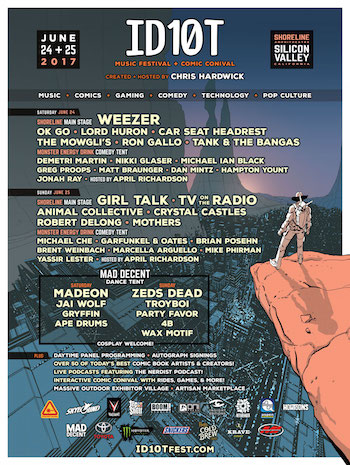 The two-day groundbreaking event will feature all of the best components of a music festival, plus the addition of comedy, comic book fandom, and entertainment, all in an outdoor setting. Each day, pop culture enthusiasts will have the opportunity to roam exhibitor booths, meet comic book artists, and catch their favorite TV and movie casts on back-to-back panels and podcasts, including a special live taping of Hardwick‘s own Nerdist Podcast. In the evening, the grounds will transition into a music and comedy hall for live performances from some of today’s top artists and comedians. Hardwick will be onsite to host the event, moderate the main panels, and introduce select bands and comedy performers.

Produced by Live Nation and Synergy Global Entertainment (SGE), ID10T will feature three entertainment stages; an interactive festival area with games, rides, and fan experiences; a massive exhibitor village; and a curated artist alley where some of the biggest names in comic books and entertainment will meet fans, showcase their art, discuss their craft, sign autographs, and more. 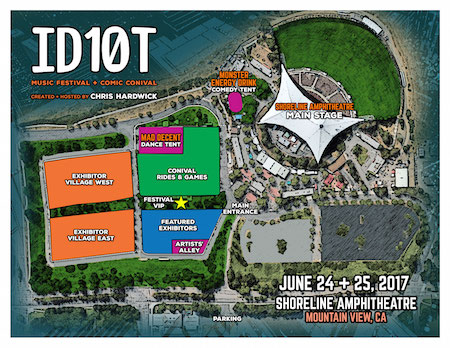