ID10T Music Festival & Comic Conival, the groundbreaking, first of its kind event that will combine chart-topping musicians, renowned comedians, makers, and some of the most influential people in the entertainment industry, together in one place for a once-in-a-lifetime weekend experience, has announced its first wave of panels, which include famed shows Portlandia, Mystery Science Theater 3000, Harmontown, and Stan Against Evil. A second announcement will be released soon, revealing even more exciting panels and guests. Created and hosted by Chris Hardwick, ID10T (pronounced I-D-ten-T) will take over the Shoreline Amphitheatre and surrounding grounds in Mountain View, CA on Saturday, June 24th and Sunday, June 25th.

Confirmed show panels and guests are as follows:

Each day, pop culture enthusiasts will have the opportunity to roam exhibitor booths, meet comic book artists, and catch their favorite TV and movie casts on back-to-back panels and podcasts, including a special live taping of Hardwick‘s own Nerdist Podcast. In the evening, the grounds will transition into a music and comedy hall for live performances from some of today’s top artists and comedians. With panels from 12:30 p.m. to 5:00 p.m., comedy from 4:30 p.m to 8:00 p.m., and music from 4:00 p.m to 11:00 p.m., attendees can expect a full day packed with entertainment, all in an outdoor setting.

The festival will also host a juried cosplay contest. Details on entry, prizes, and more will be announced soon, but interested participants can click here for a taste of what to expect: https://www.facebook.com/id10tfest/videos/1263934146994137/

Musical, comedy, and comic talent is as follows: 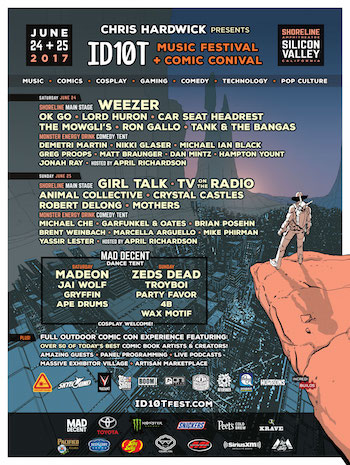