Overview: Sabrina Spellman is about to turn sweet sixteen and she has an obligation to her family to sign her name in Satan’s book of the damned. Sabrina is half witch; half mortal and was raised by her (full) witch aunts after an accident left her orphaned. She doesn’t want to give up her mortal life but she definitely wants the benefits of her darker side. It’s a whirlwind of dark vs light and right vs wrong in this epic recreation of the 1990s sitcom Sabrina the Teenage Witch. Make no mistake about it, these tales are chilling and not at all like the sweet and funny predecessor.

Cons:  Some of the episodes will mention an issue or secret and then that issue/secret is lost in the rest of the story. Each episode has multiple story lines that the characters are individually trying to deal with as well as one major problem so some things do fall through the cracks. I feel like the major antagonist in the series is glaringly obvious and as intelligent as the Aunts are, they should have caught on quickly, but they don’t. With all of the mess and confusion, its critical that you pay close attention or you will miss a lot.

If you have a younger child or teen that wants to watch, there are scary sequences, sexual references, orgies/sex scenes (not too graphic), mild cannibalism and bloody death scenes. The whole series is centered around a coven of witches that follow the Satanic bible and worship Satan. Demons and devil worship are at the core of this series, but the writers do a fantastic job of showing the dangers of blind faith and fanaticism. That, for an adult who loves horror, is a bonus so it goes in the “pros” column as well.

Pros: Well written, dark and full of current social issues, Sabrina tackles new world problems with old school imagery. The cast is amazing with Lucy Davis (Aunt Hilda) and Miranda Otto (Aunt Zelda) stealing the show. This series may be about Sabrina Spellman but these leading ladies give breathtaking performances as Sabrina’s aunts. They are the backbone of this series and it shows in every episode.

Kiernan Shipka is certainly gifted and has given us a character that is trapped between the light and the dark, strong yet vulnerable and not without flaws. She has friends that stand behind her and support her even though she’s constantly making a mess of things and chemistry with Ross Lynch (Harvey) that makes their relationship sweet and all the more tragic later in the series. Chance Perdomo is Ambrose Spellman, Sabrina’s cousin with issues of his own to deal with. Perdomo is sexy and smart and so very talented, he is the conscience that Sabrina so desperately needs.

The musical score is wonderful, the cinematography is brilliant, giving us some truly spooky views and the writers have given us a story that is fresh, original and well… chilling.

Conclusion: This first series is an absolute must see. Bottom line. I had no interest in this when I first heard of it, I am not a fan of remakes or reboots and I didn’t even watch the 1990s version. A friend of mine insisted though and after the first episode I was hooked. 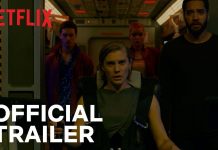