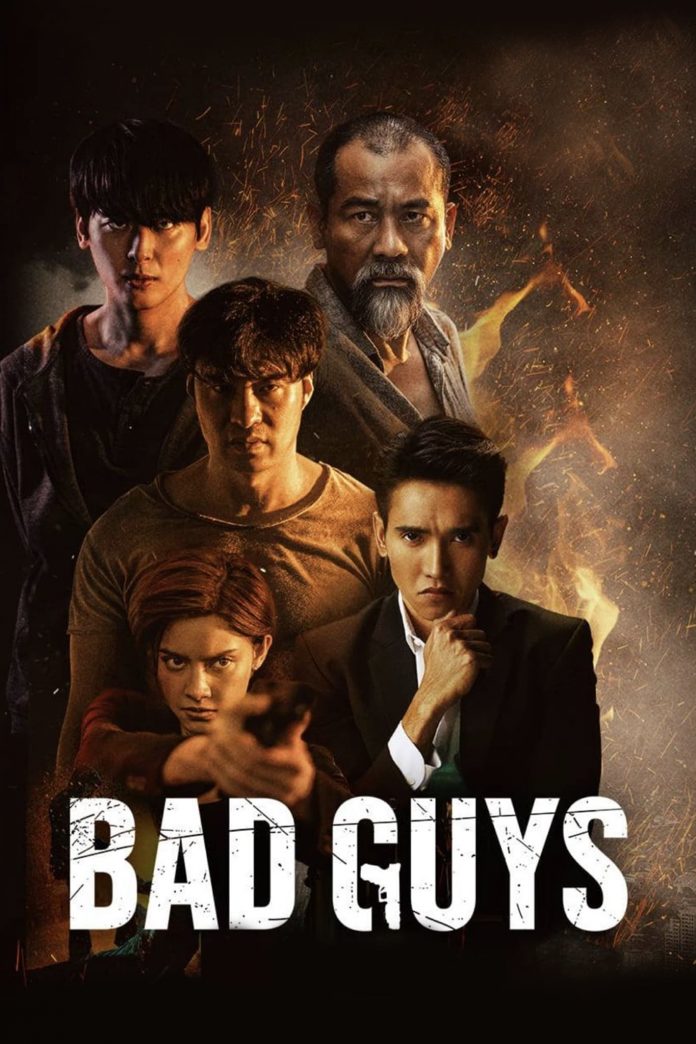 A beleaguered detective returns from suspension to form an unconventional team of very-special investigators to hunt down a serial killer!

So Detective Pitak (Surasak Wongthai) has a hell of a reputation at his local police precinct – absolutely ruthless and overpowering in his rage, Pitak charges in like an ox after whoever he’s chasing and bowls right over anyone who’s in his way, including fellow cops and his Lieutenant General Namchai (Surasak Chaiyaat), if necessary. And when the Rain Murderer, the serial killer who’s been terrorizing the city with his brutal stabbing slaughters of multiple women when it rains, as it does far too often in Thailand, joyously executes Pitak’s only beloved daughter, there will be literal Hell for him to pay. Pitak swore it, and fellow policewoman Lieutenant Aris (Chanya McClory) believes him, enough to not only get Pitak reinstated as a cop, but to also obtain permission for the unorthodox team Pitak wants to form to hunt down the Rain Murderer! It does also help that Aris happens to be the daughter of an old colleague of Namchai, one could easily say police work is in their blood.

First off for our team of extra-special investigators is Race (Jirayu Tantrakul), extensively trained and highly effective assassin. Orphaned when he was young, Race and his tiny gang of orphaned brothers were all adopted by the local executioner himself, generally known as Hem (Kajornsak Rattananissai), and trained to become assassins themselves, following in Hem’s shadow. As a grown man, Race is a hit man without equal, efficient, ruthless, methodical and frighteningly intelligent, excellent at his job and known for stoically accepting orders from Hem and carrying them out with fearsome precision – until the day he botches a job because of a pair of witnesses – the targets wife and screaming daughter. The cops finding Race sitting there in a scene right out of Kill Bill – surrounded by dead bodies, splashed head to toe with still-dripping crimson, Race perches holding a single devastating sword like a killer crow – and yet, he still surrenders to the police and goes in silence. Sometimes, even the best killers get tired of it, and want out.

Next is Yak (Yuan Kawinrath Yotamornsunthorn), at least initially considered to be the brainless muscle, the tank that can soak up all sorts of damage and deal it out x10 in return. It turns out, Yak actually worked for Hem too, in much more of a bruiser enforcer capacity, Yak can always be relied on to bull (or is it yak? LOL) his way through any obstacle. This doesn’t just apply to enemies in the way either, as the show progresses we see Yak demonstrate his blunt charge-ahead philosophy in all aspects of his life and he lovingly applies it to his friends and his erstwhile coworkers, cheerfully encouraging them to just go for it already, and we love him for it. Known for his near-constant eating, an adorable shtick for a very large man who needs to maintain his reserve for the near-constant ass-kicking Yak involves himself in, Yak is also smart, funny and kind, capable of leadership and other unexpected surprises. Anyone could understand why a character such as Yak is absolutely necessary to round out our trio of Bad Guys.

Lastly is the wild card, the enigmatic and difficult young savant known as Sky (Napath Vikairungroj). Denounced as a psychopathic murderer of multiple victims over a period of months, acknowledged genius Sky is actually a sensitive artistic soul who claims to be unable to remember killing anyone. Granted, his brooding hoodie-wearing presence, vaguely reminiscent (in my mind) to the ultra-strange character L from Death Note, would make most people suspicious but the cops probably triply so. Poor Sky is repeatedly told by everyone from his beloved girlfriend to his psychiatrist doctor that yes, he did in fact kill a whole bunch of people in horrific ways, so why can’t he remember any of it? Sky’s gifted genius brains are put to excellent use in the chasing of various villains besides the Rain Murderer, and as he gracefully defends or attacks with clubs or empty hands, we come to understand that while Sky certainly has the potential to be a serial killer, it is actually entirely possible that he was elaborately set up. So then, the question becomes why? And, by whom?

It’s not until the Bad Guys who hunt bad-der guys have gone through at least a couple of cases and more or less solved them with relatively minimal public damage, that slick and suspicious prosecutor Phadet (Than Thanakorn) decides he wants to join the gang. Initially the Prosecutor tells Pitak and the others that he wants to help get the villains plaguing Thailand’s streets from the law-related side in a prosecutorial fashion, but doesn’t hesitate in pulling rank when the others balk at his interrupting the repertoire they’ve begun to build, and he near immediately begins acting suspicious, especially towards Aris. Which turns out to be a mistake, given that Lieutenant Aris is just as tough as the rest of them, despite or perhaps because of, the lack of male genitalia.

It has to be said, despite clearly being a foreign show with subtitles and all the lush scenery of Thailand to back it up, that the show has clear, compelling storylines that are easy to follow, even for a series of murder mystery clues. We come to care about these characters – ox-like Pitak and his despair over his daughters death, big ole oaf Yak and his gigantic heart, the penitent assassin Race and his grief, graceful artist with the missing memory Sky, even Aris and her desire for justice at last – and cheer them on amidst an epic beat-filled club soundtrack.

Found on Netflix, Bad Guys (2022) is perfect for binging and can be cheered on by anyone!

Showtime presents ‘Dexter New Blood’: The sins of my father