The long-awaited New Mutants film, that’s been in development Hell since 2018, is taking another whack at releasing the thing. A panel with many of the key stars – Maisie Williams (Wolfsbane), Anya Taylor-Joy (Magik), Charlie Heaton (Cannonball), Alice Braga (Dr. Reyes), Blu Hunt (Mirage), and Henry Zaga (Sunspot), moderated by Ira Madison III, reunited the cast to dish on their roles in the film.

Madison III happily announced the hashtag to use on Twitter for the film and the Con, and the chance to see all their characters in brand new Emoji form –

Art director Bill Sienkiewicz made a pop-in visit to talk briefly about the very different artistic tone of the film, comparing his art for New Mutants to the early Nightmare on Elm St. films, particularly 3 and 4.

Lots of fan art of various beloved New Mutants characters was shared virtually with the actors, much to their delight. 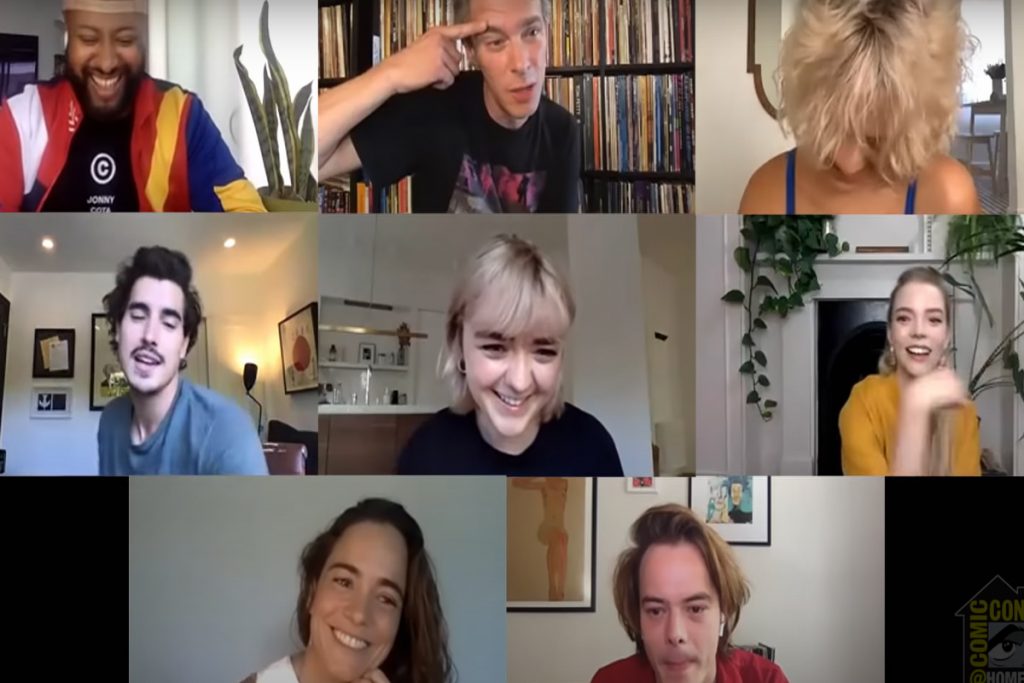 Maisie Williams was asked to compare the differences between her character Arya Stark on the show Game of Thrones, to the role of Rahne Sinclair, or Wolfsbane, and expounded on how Sinclair is a much quieter character, a different stretch for the actress.

Anya Taylor-Joy laughed over the fact that she often plays a bad girl in various other roles she’s occupied recently, and talked about how her character Illyana Rasputin, or Magik, has lots and lots of action scenes in the film.

Charlie Heaton, best known thus far for his role of Jonathon on Stranger Things, talked about being drawn to outcast roles, especially the character of Sam Guthrie, or Cannonball, and being able to draw on inner pain to effectively play Sam.

Blu Hunt roundly proclaimed herself a huge Horror movie fan in real life, yet laughed to state that the only thing that creeped her out about the whole affair was that here she was, playing a lead in a big-big New Mutants movie after only starring on a few CW TV shows. (Like The Originals and Another Life, which aren’t small roles in this reporters opinion.)

Henry Zaga dished on the rigors of trying to play his character, Roberto de Costa, aka Sunspot, to the hilt, even to the point of endangering his own health. The sheer physicality of Sunspot led Zaga to not drink water all day before what he called his “nutting up” scene, and yet the scene kept getting rescheduled! “I did have to look the part,” Zaga laughed and grinned that he would never look that good again.

Maisie and Blu were asked to speak on their character’s burgeoning lesbian relationship and the importance of LGBTQ+ representation in comics and movies today. Maisie laughed and said they did compatibility reads together before filming, and that she suspects their screen tests and auditions together, including the infamous kiss scene, would be included in the Blu-ray movie extras.

We were treated to a 5-minute opening scene from the film itself, and then as a thank-you to the fans, Madison III announced a chance to win a visit to a pre-screening of New Mutants before the movie comes out, by Tweeting this –

New Mutants has been oh so hopefully stated as being released in theaters on August 28th, 2020!