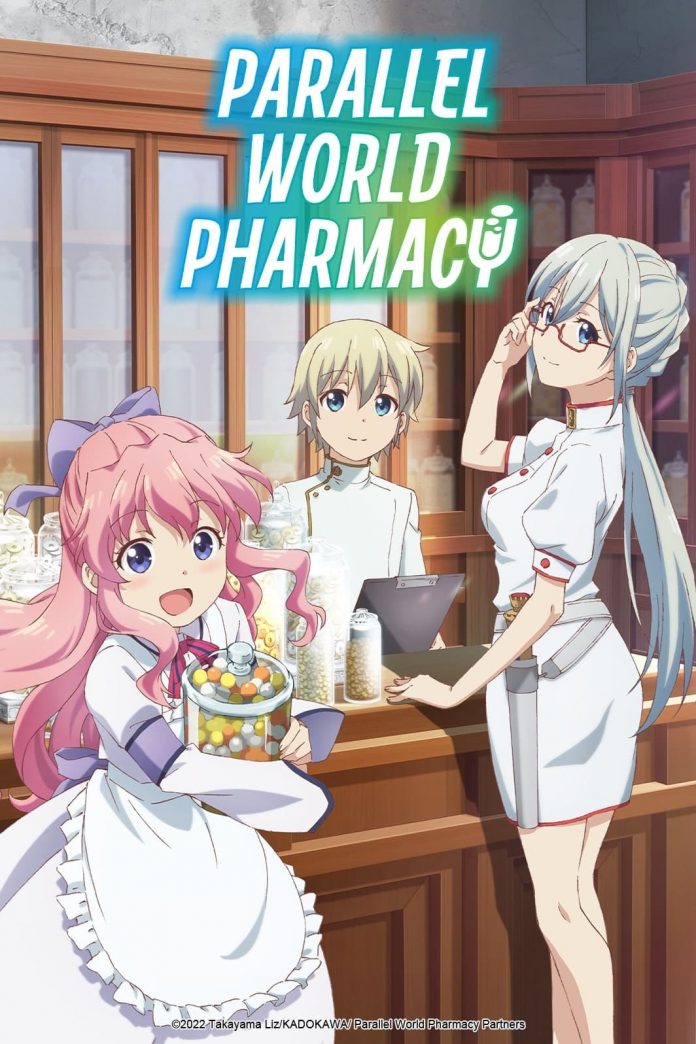 Based on a light novel of the same name from Liz Takayama, another in a long line of isekai or alternate-world anime, Parallel World Pharmacy tells the story of a pharmacist reincarnated in a world akin to 17th century France, with magic!

So Kanji Yukitani is a gifted pharmacist in the real world, obsessed with helping as many people as he can with medicine after his beloved sister died from a tumor he couldn’t treat. Inevitably, Kanji literally works himself to death, and reawakens to the life of the youngest son of the noble de Medicis family, who serve the royal family as doctors.

Pharma de Medici, as he is now known, is shocked to discover this new world uses actual magic known as Divine Arts to help practice their medicine. A large faith is centered around the Panactheos, the Gods who rule the Divine Arts, policed by the Holy Diocese and considered by the nobility to be their rightful due, and therefore only nobility and royalty have access to general healthcare, much less specialized treatments. Common folk have the option of joining the Saint Fleuve Guild, and hosting their own pharmacy somewhere in the city under the Guild umbrella, but that is the only way to consider doing such a thing. Until now.

It turns out, the real Pharma de Medicis was struck by lightning before Kanji’s soul was popped into his body, so much of his oddities after awakening were excused. But the light-up tattoos gracing his shoulders, a sure sign of the Panactheos’ favor and potential heresy at the same freaking time, scream otherwise. Pharma finds he now possesses the Divine Eye, a magic that allows him to correctly diagnose the ailment of a given patient, and he’s gifted with an overabundance of the other elements of magic, including the heretofore believed extinct None, which just keeps drawing further attention to him! Especially when his esteemed father Archduke Bruno de Medicis brings Pharma with him to go diagnose and treat the ailing Empress!

Diseases that are rife in 17th century France – tuberculosis, known here as the White Death, influenza, chicken pox, mercury poisoning, and everyone’s favorite, the Black Plague – are rearing their ugly heads to be mowed down by the Divinely inspired Pharma, and his zeal for the revolutionary thought that medicine is for all people regardless of station in life is making him enemies left and right, but also reformed allies too. One can’t argue with an official Royal charter from the Empress herself, not after Pharma, and not his official Royal Doctor father, cured her of the White Death.

And what does Pharma want to do with that Royal charter? He wants to open a pharmacy, where medicine is available to every last person, common or noble or Divine alike. And because Pharma has still managed to retain a modern-day sense of humor, or at least irony, the new pharmacy will be called Parallel World Pharmacy.

Surrounded by a host of allies – father Bruno de Medicis, still open-minded enough to embrace the changes in his son, especially when they produce clear medical results; tutor Eleonore, called Elle, initially terrified of the new Pharma, is now his strongest proponent and second-in-command when they attempt to stave off a Black Plague pandemic; house-maid and strong friend to Pharma, Charlotte, who of course is hired as an errand-girl to the Pharmacy; Chloe de Chatillion and her league of Noble ladies no longer being poisoned by mercury in their makeup, who open satellite makeup stores from the Pharmacy itself; reformed Diocese Inquisitors who now voluntarily serve as Pharma’s Holy Guard; even the Empress Elisabeth, very much alive after taking Pharma’s treatment against the White Death – Pharma does his best to give medicine to all, despite being hampered by his hosts age and physical stature, with an open mind and heart, as any real physician should.

Similar to the beloved past-future anime Dr. Stone and the isekai series Ascendance of a Bookworm, Parallel World Pharmacy is full of love and medicine, and can be enjoyed on Crunchyroll now!

Showtime presents ‘Dexter New Blood’: The sins of my father