Here we are, folks. The final episode of a fantastic season. Stan Against Evil has always carried the torch of horror/comedy, making sure to give me laughs and monsters in equal measure.

Their secret weapon, though, has been the deep connections and true bonds between the characters. Janet Varney and John C. McGinley find the heart of the show for me every week. This time, they exceed their own high bar.

Episode 8 of season 3, titled Stan Against Evie (how long have they been holding onto that one?) jumps us to the future, and into another state. Literally, we shift New Hampshire for Vermont, as an elderly Evie recounts the story of Willard’s Mill to a disbelieving historian. We go back to our present through Evie’s tale, back to that cursed town, where we last saw Stan with his eyes aglow…

When we left off previously, Stan had agreed to be possessed by Haurus, in order to gain the power to destroy Constable Eccles. In short order, Haurus makes good on that deal, and we are treated to a fantastic display of power that absolutely changes the show dynamic. Gone is the villain of 3 seasons. There is now a bigger problem, one far more powerful than our previous foe. Even worse, this new problem is currently possessing Stan.

I was stunned when the episode dealt with Eccles and fulfilled Haurus’ part of the deal immediately. Plot moves like this are truly one of the highlights of this show and a huge part of my love for it. Instead of agonizing over when Haurus might confront Eccles, we’re instead given an episode about the true cost of things. Stan was more than willing to sacrifice himself to save the town. He feels like he owes it, having been saved himself. But instead, Haurus wants a truly meaningful sacrifice from him. He must kill Evie (setting up that amazing and overdue episode title).

Of course, we’re treated to the usual cadre of gags, from Evie’s victory montage after Eccles’ defeat, Stan’s personal hell as he resists Haurus, the issue of Bored Female Sheriff Monthly, Denise’s plan for a mini-golf course, to Kevin’s real last name. The show never lacks for funny, but we’re deep in the mythology this time around. The Haurus plotline is a threat felt in nearly every scene.

By the time we reach our climactic final fight, we’ve directly explored what kind of pain and sorrow powers Haurus. We’ve come to understand the love that drives Stan to make these choices. And we’ve had a classic smelting scene where someone turns jewelry into a bullet. It’s everything you could ask for in a sitcom season finale, and more.

I’m not ready to say goodbye to Willard’s Mill. If the show must end, this is a fine spot. It’s a funny, heartfelt episode capping a wild and surreal season. But there should be more. I want to know Duquette’s history with Eccles. I want to know how he came to work with Haurus, and what Stan and Evie’s final plan means for him.

I want to know what the last hole will be on Denise’s mini-golf course.

Whatever those stories might be, I trust this show to surprise and thrill me, and for this cast to bring the emotions home. Let’s hope, as Evie says, that “This is just the beginning….” 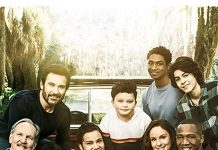