Primal releases Friday November 8th at select theaters and on demand. This new action packed film directed by Nick Powell, pits hunter and collector Frank Walsh (Cage) who expects a big payday after bagging a priceless white jaguar for a zoo. But the ship bearing Frank’s precious cargo has another predator — a political assassin facing extradition to America played by Kevin Durande. When the prisoner manages to break free, Walsh must utilize his expert skills to capture the dangerous killer alive

We had a chance to catch up with Nick to talk about the film. These days it is common place to see CG in big budget films (Marvel) but to carry out that kind of vision on an independently made movie is quite a feat.

That’s my Entertainment (TME): Thanks again for the opportunity for us to talk with you about your film.  You’ve been in the industry a very long time. How did you find your way into the storytelling business?

Nick Powell (NP): I left school… I went to engineering college. I was supposed to go to university to study pure math and computing numerical systems… something like that or along those lines and I didn’t want to do it. I was always wanted to be an actor. I loved the theater and movies.  So I turned that down and went to London to study at an acting school for a few years and then I started to work as an actor. I was directing some theater; I was sort of pushing in that direction then I met a friend who was planning to be a stuntman in the UK I trained to be a stuntman and got qualified and did acting at the same time. Eventually I got to direct.

TME: So how did you get involved in Primal?

NP: This project came across my desk and the producer said if we can get one of these actors on a list that we can probably get this movie made… And it just so happened that Nick’s name was on the list  Once I read the script I thought about Nick for Frank. It was an obvious choice from my point of view. So seeing Nick’s name on there and me sort of seeing for the role. I sent Nick the script and said look I love it and I want to work with you again.Let’s do it. And the project came together from there.

TME: With your background as a stuntment and now that you are in the director’s seat, what was the most important aspect of the story that you had to tell?

NP:When I read it I felt like the movies I used to love when I was younger. It felt like a throwback. It didn’t feel totally contemporary in terms of where it was. There was something about it that feels like an 80’s 90’s throwback movie… It’s a popcorn genre thriller with a little humor in there. There was something about it that I knew what it was as soon as I read it. It’s a thriller that was designed to have people at the edge of their seats. It was about making in a fun ride for the audience. Let the audience enjoy it.

TME: It definitely was a roller coaster and again, with the CG it was still very realistic. You don’t really expect some of it I see some of the movies out there and you can see the green screen where they pop out.

NP: I remember watching a lot of movies in the beginning and seeing things that felt like CG and I thought if they had only racked focused at the time so what they were putting in focus were out of focus. They drew attention to the CG as opposed to anything else. The best way to do it is to shoot as if it wasn’t CG. How would you do this if it was a real animal. How would you light it if it was a real animal. I am all about downplaying the CG and making it as much of a background element so it feels more real. The more you can do that the more you can bring the audience into the project itself.

TME: Can you tell me one of the craziest things that happened on set?

NP: So it was difficult enough having a parrot be a real parrot. It took so much more time with a real parrot than it would have been with a CG parrot. There are certain things that you have to do for real in order to make the CG justifiable, and more believable. So that was one of those things where we had to do the parrot but it took so much more time shooting the parrot. For Nick Cage he had to interact with the parrot so in the scene he would come over and say his line and the parrot wouldn’t act. And we wait and then any second now the parrots going to move its wings… and then he’d try again and again and he would say his line and nothing. He said that this parrot is a bit of a diva and then all of a sudden the parrot would do it but Nick didn’t say his line. We had two trainers with the parrot and it was just taking too much time. We had to take the parrot out and let it relax.

Primal is out in theaters and on demand tomorrow. 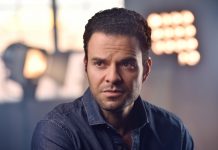 The Journey Of Alexander Bedria: Actors And Life Lessons 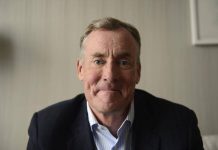 Love Never Fails: John C. McGinley’s Journey From A New Father To Becoming An Advocate For People With Disabilities.