A down-on-his-luck small-time Japanese crook finds himself caught up in the whirlwind life of big complicated con jobs all across the world!

So Makoto Edamura, who almost inevitably gets renamed Edamame (Japanese soybean snack food) because that’s the kind of story this is, is a nobody. His father is a known con-man who went to prison, his mothers sick in the hospital, and Edamura himself can’t seem to do anything right, and so after a failed attempt at illegally obtaining funds, gets himself landed in prison. After getting out and returning to his one obsession, the collecting of gashapon (Japanese vending machine capsule toys), Edamura tries a small failed con on what he thinks is an unsuspecting white guy, and thus meets the man who will turn his sad little life on its head! 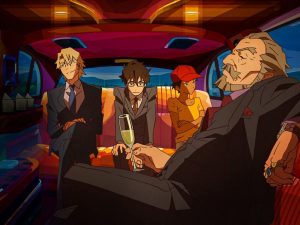 Laurent Thierry is a French con man who when he was little, informed his mother he wanted to become a diplomat. He speaks several languages fluently, and after a series of misadventures involving his beloved mother and a villainous con man, Laurent becomes what is known as a gentleman thief – the ultimate con man, targeting the rich scum of the world who are nothing but a stain on society. Together with his sassy, enigmatic crew, Laurent pulls off giant Ocean’s 11-like long cons, usually escaping with a lot of money, a considerably poorer bad guy, and a long-suffering Edamame who sighs and rolls his eyes, but goes along with Laurent, because damn it he’s right, again.

Abigail Jones is Laurent’s second, haunted by the bombings in Baghdad of her childhood and the unrealized dreams of ballet training, which of course stand her in good stead for athletic cons; Cynthia Moore is a passionate member of the crew who had stage training when she was young and more often than not seduces the marks, but battles past demons of her own; Kim Si Won is the loud Korean lady of the team who proves to be a Jin of all trades as she shouts her way through any situation; and of course it turns out later that Edamura’s father, Seiji Ozaki, ran with Laurent’s original crew.

The series is broken into blocks of episodes called cases – Case 1 Los Angeles Connection has the Confidence Team pulling a con against a drug dealer and his crew in Hollywood, Case 2 is Singapore Sky and involves fixed plane race betting and Arabic princes; Case 3 Snow of London features the comeuppance of the art forgery world and the righting of old wrongs, and finally, Case 4 The Wizard of Far East is the final chapter and features the last huge con that reunites Edamura with his estranged con-man father.

The show is an anime and should be watched in the original Japanese language with subtitles, and also there are several other languages sprinkled throughout the show – English, French, Chinese, etc. Told with plenty of heart, lots of long-con “gotcha!”-style moments and a generous helping of snark, ‘The Great Pretender’ is a terrific binge-worthy outing from Netflix!