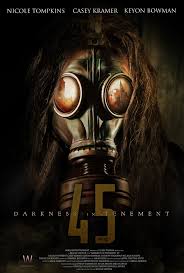 Set in the 1950’s, a biological threat from the Soviet Union leaves the remaining occupants of Tenement 45 sequestered together to face their demons, both from without and within.

So Joanna (Nicole Tompkins) is a teenager, and like all teenagers, she’s keeping secrets. Then again, all the younglings trapped in 45 – Felix’s (David Labiosa) beloved children, his two daughters Isolina (Melissa Macedo) and Isabel (Marla Martinez) and young son Tomas (Nicolas Aleksandr Bolton), and small parent-less Walter (Keyon Bowman) and his tiny companion Rhonda (Emmy Green) – are keeping secrets from the adults stuck in there with them.

Joanna survived a violent outburst in her recent past, one that got her sent to live with her Aunt Martha (Casey Kramer) in the first place, before lockdown was initiated. Dubbing her fight within the enemy as only “the darkness”, Joanna struggles against the tyranny of her Aunt and the clamp down she convinces the other adults of the tenement to adhere to. Felix is worried about the food and supplies running out, so of course he ends up being the next person volun-told to go search the neighborhood for, whatever he can find, really. Mr. Horen (Anthony Marciona), the actual owner of the tenement, is torn between wanting to live, wanting the young ones to survive, and oh yes, Martha’s overbearing stance on always being right. But Joanna has dreams, visions she insists are signs of actual other people and life outside, and while she desperately fights the darkness within herself, Joanna sparks a plan to finally get herself and the other children out from under her Aunts and the rest of the adults violent thumbs.

Simple but effective use of practical effects and fine today-relevant storytelling, plus excellent acting from all comers, deliver an enjoyable if mad little romp in ‘Darkness in Tenement 45’.