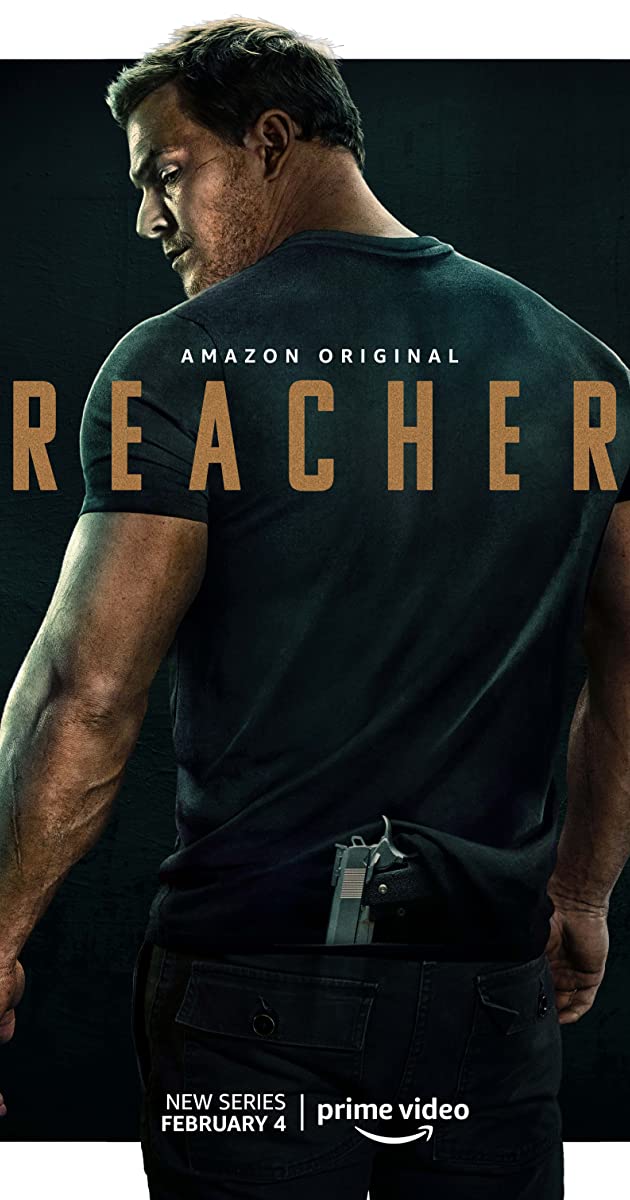 A former Major of the Army military police, recently released and self-proclaimed hobo Jack Reacher heads to Margrave, Georgia, where he’s accused of murder and has to fend off corrupt cops, shady businessmen, and crooked politicians!

So the character Jack Reacher, from the books by Lee Child, has gone through a few screen incarnations at this point, perhaps most notably the Tom Cruise version. This latest embodiment, played by an absolutely stacked and jacked Alan Ritchson, seems much closer to Childs’ original vision, so let’s dive! Reacher season 1 is based on Childs’ debut Reacher novel, Killing Floor.

Like Agent Cooper, Reacher does love his pie. And yet, he never gets to actually experience it, for literally when he’s about to tuck into a piece of “best in the state” diner peach pie, he gets arrested by some shouting cops. And this is how he meets the law enforcement side of the Scooby-Doo gang in the making – Chief Detective of police and apparently the only black man in the entirety of Margrave, Oscar Finlay (Malcolm Goodwin); and pretty little Roscoe Conklin (Willa Fitzgerald), who immediately gets caught in Reachers’ orbit, whether she likes it or not.

It seems everyone in the entirety of Margrave has a secret to hide, and some are larger than others. Kliner Sr, (Currie Graham) is the owner of Kliner Industries and is more or less the godfather of Margrave, considering how much dirty money he’s sunk into the town in an attempt to more or less purchase ownership of it outright. Kliner’s spoiled son KJ (Chris Webster) of course immediately takes on his father’s dislike of Reacher and does plenty to meddle in Reacher’s unsanctioned investigations into the corruption of Margrave. The Mayor of Margrave, Grover Teale (Bruce McGill), is happily in league with every dastardly decision Kliner wants to make for Margrave, though he also has personal side hustles he tries to keep quiet. Reacher makes friends with the elderly black barber in town, Mosley (Willie C. Carpenter), after easily figuring out Mosley has a whole secretive past that occasionally crossed paths with Reacher’s own. Margrave’s medical examiner Jasper (Harvey Guillen) is one of the few law enforcement officers not trying to impede Reacher and pals in any way, and indeed, even tries to help them as the bodies begin piling up! And of course, there’s FBI Agent Picard (Martin Roach), an old friend of Reachers who comes to Margrave ostensibly to provide witness protection, but of course, has a dark hidden agenda all his own!

So, Paul Hubble (Marc Bendavid) is a quiet little banker, living with his pretty wife Charlene or Charlie (Kristin Kreuk) and their two kids in a modestly well-off place here in Margrave. Except he isn’t – Paul happens to be the first unwilling domino in a whole Rube-Goldberg operation of corruption that spans Margrave and beyond, and Reacher, aided by Roscoe and Finlay, is about to crush that vortex like an empty beer can!

Saying anything more would give away the entire game, so Moxie can but say, this version of Jack Reacher is quite entertaining, much closer to the books, and is worth repeated viewings! Season 2 has already been ordered for Amazon Prime Video, based on ‘Bad Luck and Trouble’, the 11th book in the Lee Childs Jack Reacher series.

The Lord of the Rings: The Rings of Power Makes The Journey to Comic-Con International