The original TGIF lineup is finding its way to Disney+ as Dinosaurs landed on the streaming service last Friday. Watching it a blast from the past, in so many ways. Doing a re-watch is necessary for anyone that grew up in the early to mid-90s. Not only transfers to digital fantastic but being able to simply sit and stream the episodes one after another feels like a rare opportunity. 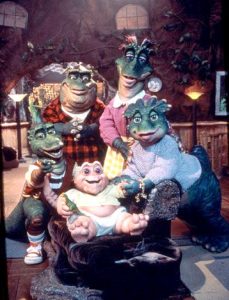 That being said, not all of it has aged so well, but it was a product of its time. It is easy to forget that things like gender roles were still extremely strict in the early-90s but much of the series takes that foundation and tears it down through the course of the show. Watching it now as a grownup it is easy to forget it is a kid’s show. Within minutes of the first episode, the show throws out some very, very dark humor that I’m sure most of the kids watching back then didn’t understand.

In fact I’d go so far as to say that Dinosaurs was straight up ballsy right out of the gate. It’s basically The Honeymooners with live-action dinosaurs. If that doesn’t sound like something you’d say after a line of coke or a jolt of acid I don’t know what is. Yet it works, it works really well. You can see them trying to get more marketability here and there, specifically with the talking baby, but outside of that, it doubles as fantastic social satire.

The entire series is now streaming on Disney+ so check it out to relive your childhood and see it with new eyes as an adult.