Comic-Con At Home took a dive into the world of both horror and the LGBTQ community Thursday night as Shudder presented a panel featuring some prominent LGBTQ creatives that specialize in the horror genre. Hosted by writer Jordan Crucchiola, the panel included Don Mancini (creator of the “Child’s Play” franchise), Sam Wineman (director of the upcoming untitled LGBTQ Horror documentary on Shudder), Nay Bever (co-host of the podcast “Attack of the Queerwolf”), Lachlan Watson (actor, “The Chilling Adventures of Sabrina”), and Bryan Fuller (creator of NBC’s “Hannibal”).

So what is “queer horror”? Wineman broke it down into four categories: “explicit representation, queer coding (whether it is intentional or not), queer ownership, and having a queer creator.” Mancini shared that when developing the first Child’s Play, he didn’t consciously include gay themes because it just wasn’t commonplace at the time. He did intentionally leave out a father character for Andy as a form of “revenge” against all the fathers that didn’t accept their queer children. It wasn’t until “Bride of Chucky” that Mancini felt it was “safe” to explore more gay culture in the Chucky franchise. He began casting famous icons in queer culture like Jennifer Tilly and Alexis Arquette. “The films have just gotten gayer and gayer,” noted Mancini. The 2004 film “Seed of Chucky” further explored queer culture and even gender identity with the character of Glen/Glenda, the child of Chucky and Tiffany. While not specifically discussed here due to potential spoilers, it has been reported that we will see these themes further explored in the upcoming “Chucky” television series for SyFy. 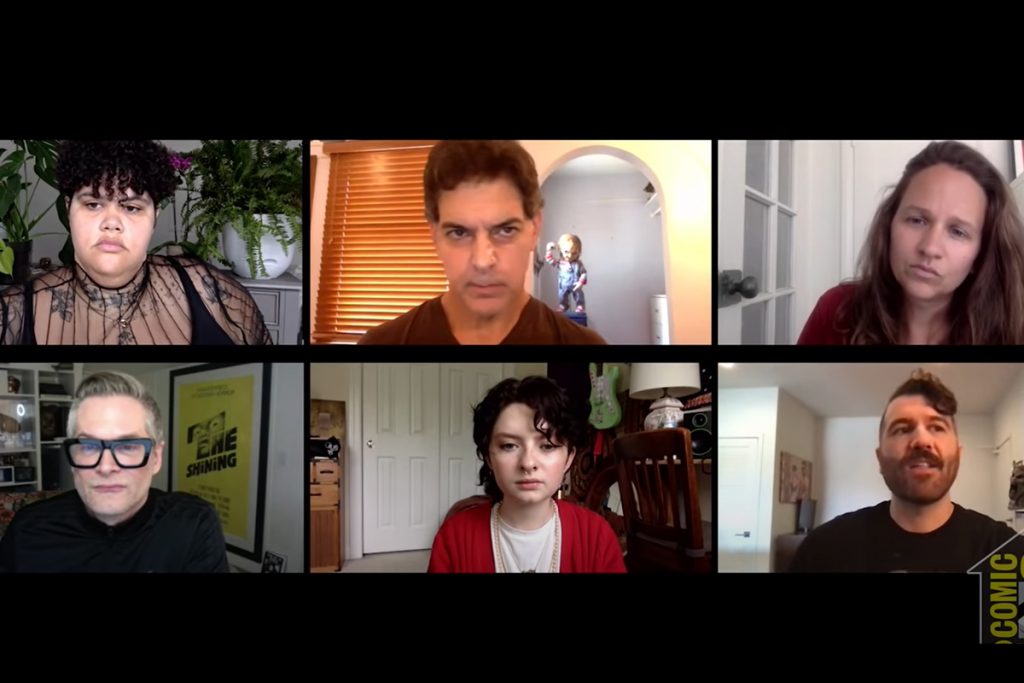 Watson spoke of her time on “The Chilling Adventures of Sabrina” and what it was like to play a queer character. “It’s this box that we have of queer actors, queer people, queer creators can only create queer art and that’s something that I think is worth breaking down because there’s so much more to it than that.” Bever also expressed her feelings on the subject noting that she feels a lot of queer fans use horror to reclaim their representation from all the monsters i.e. when the bogged down, bullied kid fights back and kills their oppressors. “If queer and or trans folks want or do see themselves in something, then it’s ours. Period. I think any community that is marginalized and experiences the death rates and death threats that we do, we are absolutely 100% allowed to find ourselves wherever we can.”

Fuller also shared his own experiences through the development of Hannibal and how he approached the series with a variety of queer themes. He explained he initially wrote the characters of Will Graham and Hannibal Lecter as “two straight men who fall in love with each other”. However, he later began to shift the dynamic to more queer themes and following a queer narrative as he saw that the show had such a following in the LGBTQ community.

LGBTQ Representation has, in the last decade, become larger and more positive. As a proud pansexual man myself, I find that I identify with many of the themes and scenarios discussed and can’t wait to see what the future holds for queer representation in horror as well as all forms of media.