Moderated by Steve Weintraub from Collider, the panel featured a trailer for the Horror film ‘Antlers’, and an interview with director Scott Cooper and producer Guillermo del Toro.

Del Toro spoke about the overall message of the film, stating that all the pain and rage incarnate in the movie is like an invocation for the dubious star monster, a Native American legend called the Wendigo, calling it “a metaphor made flesh”.

Del Toro gleefully spoke about the strange intersectionality of his three most influential directors: Disney, Hitchcock, and Spanish-Mexican surrealist Bunuel. 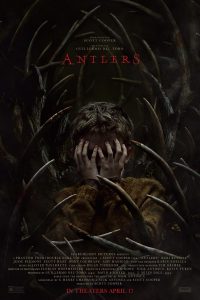 When asked if they were given a ton of money and could green-light any project, Cooper talked about a script he had written for an Edgar Allen Poe film, and of course, del Toro immediately responded with the Mountains of Madness and Frankenstein. Though del Toro added, he would want to do Frankenstein in a 2 to 3 part story, in order to get all parts of the book, as it changes voices so many times and is a complicated story.

Del Toro went on to talk about the filmmaking process, stating that editing is typing with the most expensive typewriter in the whole world. He claimed to be a big believer in the physical medium of DVDs, mentioning he has over 7 thousand of them in his house, likening his collection to when one wants to read Walt Whitman or Ulysses, you go and pull out the physical book and read, or in this case, watch. Del Toro watches all the extras and audio commentary, he said, and explained that by watching your favorite filmmakers closely, their techniques can eventually become a new tool for your tool-belt.

In del Toro’s opinion, the Coen brothers are the best living filmmakers right now, but they’re also the ones who hold the most mystery for fellow filmmakers. Del Toro served as a juror for them at the Cannes film festival, and interviewed them whenever he got the chance, and rhapsodized about their filmmaking instincts being all their own.

Cooper talked about the overlying themes of the film ‘Antlers’ – climate crisis, drug-addicted populace, our treatment of Native Americans, and abject poverty, all wrapped together in a monster film. How he and del Toro worked well together on the setting of the film, and the energy between spaces Coopers films have, referring to it at the Scott Cooper moment.

Cooper talked about ‘Antlers’ being his first immersion into the supernatural, and how risk is one of the great pleasures of making a film. He said, horror films are for people who don’t want to confront the darkness inside themselves directly, and they (horror films) provide an escape.

Cooper spoke about having Native American story advisors on the set of ‘Antlers’, especially his friend and fellow filmmaker Chris Eyre, who made the 1998 film ‘Smoke Signals’, and Professor Grace Dylan of Portland State University, head of Indigenous Studies and considered the foremost authority on the Wendigo.

“The First Nations (Native Americans, et al) in Canada and North America advisers told me they really do believe in the Wendigo. The Wendigo represents greed and colonialism. As a white Anglo-Saxon Protestant raised-Episcopalian, if I’m going to discuss any Native American folklore or themes that discourse through NA life, I want to have people (advising) who know much more about it than I, and I want to get it right.”

The master of combining practical and digital effects from previous jaunts such as ‘Pan’s Labyrinth’, del Toro explained he did exactly the same for ‘Antlers’. The Wendigo has specific precepts you have to have, del Toro said, like the name of the film, ‘Antlers’. The design elements have to be almost surreal or abstract, because as del Toro cleverly put it, they’re not creating a monster, they’re creating a God.

‘Antlers’ is set to be released by Searchlight Pictures on February 19, 2021.